I started out painting some horses in my fast frenzy style.  But the frenzy got away from me and there was no redeeming those horses.  So I covered the whole thing over with this owl.

Do you know how bad ass the great horned owl is?  I've been a fan ever since we saw some at the state fair several years ago.  The other owls on display had fun facts like "hunts mice and snakes", "makes sweet little hoot-hoot sounds", and "can do a 360 with it's head"  (or something like that).  And then we got to the great horned owl, who was staring us down just like in my painting, and his fun facts were pretty much "will not hesitate to attack you or your pathetic household pets."    Okay, I don't exactly remember.  But for real, here are some tidbits from Wikipedia:

prey: "One instance of an owl taking a bobcat... as prey was also reportedly observed"

"large snakes, ...about equal in mass to the owls, have used their muscular coils to twist around the owl ... sometimes the owl is still able to overpower and kill the snake or inflict enough injury to win the exhausting contest or both combatants die"

enemies: "[The golden] eagle is the only regular predator of the owl, ...  A single instance of an golden eagle hunting a great horned owl during the day has been known to be observed. However, the eagle was scarcely able to survive the attack as the owl was able to trade blows to defend itself before succumbing to the eagle."

this owl takes on the mantle of avian apex predator.[4]  (also known as an alpha predator, super predator, top predator or top-level predator)

Basically, the great horned owl is a total boss.  And they're beautiful and can fly.
at 10:38 PM 2 comments:
Email ThisBlogThis!Share to TwitterShare to FacebookShare to Pinterest

To keep the animal theme going, I did an elephant painting this afternoon.  It's got it's issues, but it was a fast frenzy of paint, which is what I like.  The faster I paint, the less hung up I get on details, which makes it more fun.  Fast messy painting also helps me to go with my first impressions - "here's a shadow",  "I like how this surface goes", "blob of  stuff I don't care about"...     and I don't worry about how it will come together.  I use mostly one brush and don't wash it off often.  Which is probably bad painting form.

I've heard writers say that's the way to go about writing.  Just write what comes to mind without self-editing to keep the flow going.  And then later go back to edit.

What else is like that?  I like doing things that way.  If I try to plan too much, I get bored and I'm not sure how things will go anyway.  So just jump in, have fun,  and see what happens.
at 4:22 PM No comments:
Email ThisBlogThis!Share to TwitterShare to FacebookShare to Pinterest

I guess I'm following up my February failure series with a March animal series.   Painted this wolf just now:
Fast, a little messy, with some puffy clouds.  I'm happy with it.

I didn't mean to do a painting of our dog, Jodie, but it looks a little like her.  She's an Alaskan Malamute.  We like to call her wolfie. 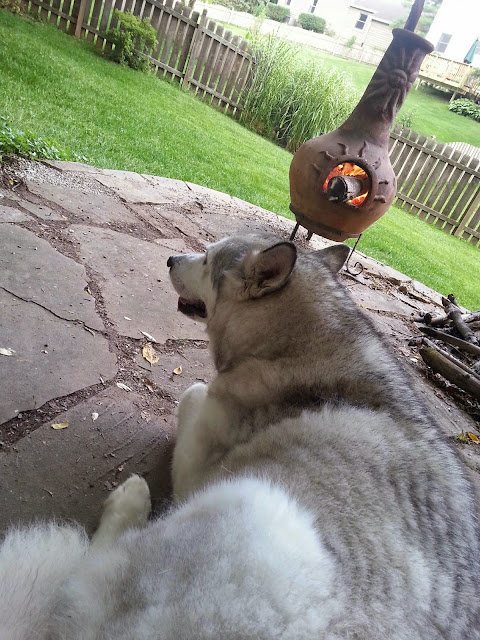 I guess when there is a wolf in a movie, they will often use an Alaskan Malamute.   Jed the Movie Dog, who was in a lot of movies (White Fang, The Thing, The Journey of Natty Gann...), was part wolf and part Alaskan Malamute.

Malamutes are pretty smart.  It makes them difficult to train and they get bored easily, but it is a positive trait that they think for themselves.  If they're at work leading your dog sled team, and you direct them towards what they know is bad ice, they will not listen and take a safe route.   (I forget where I read this.)

Jodie also is a soulful pup.  On Wednesdays at noon, when they test the tornado sirens, Jodie likes to howl along.  Here is a sample of her beautiful singing voice.

She's a sweetie.
p.s. That thing on the deck is a heated hut for our cat.    Spoiled animals abound!
at 5:35 PM No comments:
Email ThisBlogThis!Share to TwitterShare to FacebookShare to Pinterest

No rhyme or reason - I painted this parrot today.
I didn't bother to do a background or provide any context.   Or legs.      Art!
at 5:45 PM No comments:
Email ThisBlogThis!Share to TwitterShare to FacebookShare to Pinterest

I finally did a painting today:
I painted this so fast and sloppily - it was super satisfying.    I am sooooo ready to kick off the winter funk and leap into some warm weather good times.   For the past couple weeks, staying under an electric blanket and reading has been more attractive then heading down to the basement and painting.   Hopefully the "in like a lion" part of March is over!